Along the Ho Chi Minh Trail on motorbike or car

Those that travelled on the Ho Chi Minh Trail are legendary for their depths of endurance, dogged persistence, and their soli-darity with locals. This is one of the great human testimonies.

Mu Gia Pass is famous for being the principal entry point into Laos of the 16000km series of paths known as the Ho Chi Minh trail. It is estimated that 75% of all truck traffic, carrying supplies from North Vietnam, destined for Viet CongViet Cong revolu-tionary forces in south Vietnam came through this narrow val-ley in the Annamite Range. Nowadays, this pass is known as the Naphao/Chalo border checkpoint between Khammouane Province, Laos and Quang Bin Province, Vietnam. During the Second Indochina War this road was a muddy track low in the valley streamvalley passing through stream–beds and squeezed between steep sandstone mountains to the north, and a maze of giant limestone monoliths to the south (Hin Nam No National Pro-tected choketected Area). Once the pass was negotiated, a further “choke-point” through limestone karsts near Phanop and Vangkhone proved to be the narrowest constriction along the Ho Chi Minh Trail. This constriction caused this area to be one of the most heavily in heavily armed sites, and in-turn, the site of most concentrated aerial bombardment on the trail.

The view from the Naphao border checkpoint road enables a spectacular view of the Ho Chi Minh trail. Imagine the noise of trucks struggling through the muddy valley below; the intense bombing and the frenetic reparations to the road enabling traffic to continue along the trail virtually uninterrupted. In this area the landscape still bears witness to the unprecedented aerial bombardment through bomb craters still visible after 4 decades. Each villager who lived through the war here has a story of an epic struggle for survival that has remained largely unacknowledged. Visiting this area provides an unforgettable experience and honour mixing with those villagers who sur-vived in this, their home.

The spectacular limestone labyrinth along the border seen to the south of Naphao road is the 82,000ha Hin Nam No Na-tional Protected Area. The rugged landscape directed the Ho Chi Minh trail to the west and further into Lao. Nowadays rare primates and hornbills are amongst the wildlife that still occupy this refuge.

A village with a free standing limestone outcrop which was passed by many thousands of North Vietnamese soldiers on foot, bicycle, or truck. This limestone outcrop housed hun-dreds of local villagers, North Vietnamese and Phathet Lao troupes at any one time during the war period. Two larger caves gave shelter to villagers. In one of them (Tham Nam) a chimneychimney–like passage goes for about 100m, right through the base of the outcrop and into another cave on the other side that was occupied by Vietnamese soldiers. These soldiers shared their rice with the villagers who couldn’t plant or har-vest 9vest any rice for a 9-year period. Nowadays it is forbidden by villagers to go through the tunnel, as the limestone is still unstable after the Viet-namese soldier’s cave took a direct hit, shattering the limestone structure and making the sides of the tunnel weak in places. Always be aware that there is also a danger of unex-ploded ordinance (UXO) in all 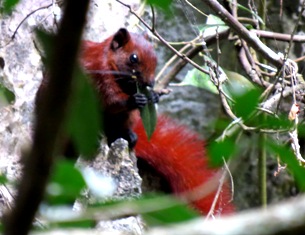 Located at a ford on the Nam Ngo River. The legendary trail crossed through this village. The cobblestone-paved riverbanks and sections of road in the village attest to this. This village is the site of the largest search and rescue effort by US forces during the whole Vietnam War period. In 1969 a Phantom F-4C was shot from the sky. The two American air-men ejected and landed each side of the river. One was picked up on the 3rd day (for more information google “boxer 22 Phan-op”). From 1984, the village school used the wing-tip of what is thought to be from “Boxer 22” as a black-board for a period of 10 years. The F-4C wingtip has come to rest in the temple grounds in Ban Phanop.

This reThis village was re–established in an area of overlapping bomb craters. As you enter the village, you won’t see any paddy fields. There are only fish ponds, and buffalo pools here. During the dry season vegetables are grown in the moist depressions still evident after 40 years. One can only wonder; “surely this must be the most bombed place on earth”. Caves used for shelter during this time are located over the river and about 2km away. They include Tham Peow Maa soldier’s cave and Tham Peow Khong water cave. 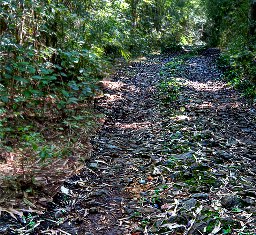 People here are famous for their scrap metal collection skills. They have even devised metal detectors that can be used under the water in the river that flows past this village. Risks faced by these villagers to earn a basket of sticky rice are unfathomable. One family has incor-porated the metal war-time ordinance into their house, while others have sold direct to Vietnamese traders. See if you can detect the house clad with flattened aluminium clus-ter bomb dispensers. A ladder made from the tubes can be seen leaning against the veranda. These tubes were dropped-off planes after CBU 14 and SUU 14 cluster bombs were dis-pensed. The presence of these tubes, are an ominous re-minder that this area is likely to be littered with anti-personnel cluster bombs that are yet to explode. The work of organiza-tions like UXO Lao, and humanitarian organizations like MAG to disarm the countless dangers still lurking on the ground goes on to this day, particularly in this, the most bombed place on earth.

Village Guides from Ban Nongboua are available for a “War Refuge Cave Tour” (1hr 15min walking for about 700m). The caves are about 1km from the village. Please note that the-cave tours are facilitated by village guides, so foreign visitors please be aware that languages will be limited, and non-verbal communication will be paramount. Local knowledge is essen-tial in caves. Those with professional non-local guides will still need to have a local guide when entering caves. 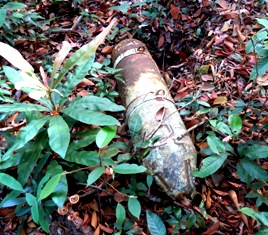 The area is contaminated with unexploded ordnance (UXO) left over from the war.
Simple Rules to follow regarding UXOs:

Special Warning: The cave used by Vietnamese soldiers (Tham Bing) has explosive heads visible on the ground and is structurally damaged from a bomb blast. It is not recommend-ed to enter.

When motorbikeWhen hiring a motorbike

Thakhek to Langkhang is about a day journey. The road is good on Route 12. At Langkhang the roads to villages are unsealed and there is a river crossing to get to Phanop Village. There are usually villagers on standby with a boat to take you across for a small fee. It is worthwhile to pay an extra villager to take care of your bike while crossing as loosing your bal-ance midstream will result in a submerged motorbike.

A number of both Lao restaurants and Vietnamese noodle shops are in Langkhang. In the restaurants if there is no menu there is usually pictures displayed. 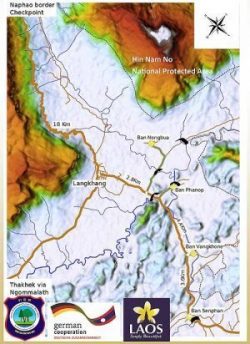 The northern part of the Ho Chi Minh Trail in Laos began in Khammouane Province and passed through areas that are now part of Hin Nam No. You can visit some of the attractions along the Ho Chi Minh Trail to learn about the Secret War and amazing resilience and strength of the local people. Key sights visit include