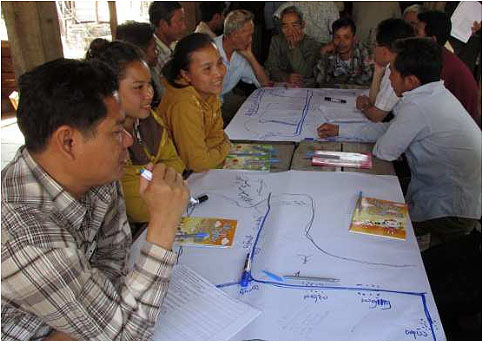 Due to the successful efforts over the last year, we now have an effective team of about 230 people managing the Hin Nam No National Protected Area.

On 27 January 2015, the Hin Nam No co-management team conducted the yearly management effectiveness self–assessment, based on a method developed by the ASEAN Centre for Biodiversity. The members of the team divided into three different groups (Provincial and District Offices of Natural Resources and Environment as well as advisors) to make their self-assessments. Questions where a different score between the groups occurred were discussed in detail in a plenary meeting until all participants agreed on the final score. In 2014, the total score for Hin Nam No was 62% which is slightly higher than Virachey National Park in Cambodia (55.6%) but lower as Khao Yai National Park in Thailand (87.2%). All scores below 65% are considered as below average performance. In 2015, the total score for Hin Nam No is 71% which shows an increase of management effectiveness of 9% in one year. The areas scoring higher in 2015 compared to 2014 are:

Developing and implementing an effective and equitable management system takes time thus it is an ambitious and valuable process for all stakeholders involved. The official authorities positively recognised the positive outcome on more effective management of Hin Nam No. Therefore, Hin Nam No acts as a pilot which can later be adapted to other protected areas in Lao PDR. 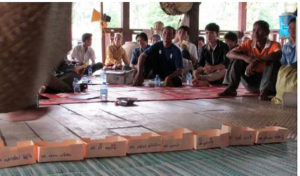 Another major weakness remains that there is no secure budget for Hin Nam No and so far the management is wholly reliant on outside funding. Areas where there is further scope for improvement are boundary delineation and demarcation in areas that are still unclear, involvement of the local people in operational planning and reporting and more strategic alliances and partnerships to gain more support from other stakeholders. Major strengths of Hin Nam No are the design of the protected area which helps to achieve the objectives, maintains ecological processes and is appropriate for species and habitat conservation.

Hin Nam No provides excellent environmental services all year long, as the area prevents most natural catastrophic events and is still free from encroachment of agriculture, mining, housing and industry. Luckily, Hin Nam No is protecting itself as there are limited alternative land uses due to ruggedness of the area. But most important is the contribution of the local people which are connected to Hin Nam No and very eager to be part of its conservation, especially with an increased pressure from outside.