Participatory Zonation and Boundary Delineation in Hin Nam No.

Early this month, villagers and a team of experts and government staff made further steps to complete the participatory zonation and provisional boundary delineation of the Hin Nam No National Protected Area (NPA). During this zoning process, villagers and government staff jointly discussed existing data and maps and the villagers decided to partition the park into 87% (76.082 ha) Total Protected Zones (TPZ) and 13% (11.871 ha) Controlled Used Zones (CUZ).

The basic rules and regulations governing the access and use of these zones are stipulated in the Forestry Law and in the co-management agreements that have been approved by the District Governor of Bualapha on 24 April 2015. The CUZ can be used by the villagers for subsistence purposes according to their customary rights. More discussions are needed to elaborate these use rules in more detail in the future to prevent unsustainable use by villagers and outsiders.

During the participatory zonation the villagers were also asked to verify the current outer boundary of the park. They propose 87.953 ha for the park which is more than the 82.000 hectare declared in 1993. The difference in size is mainly due to an error in the calculation of the 82.000 hectares in 1993. There are only some proposed changes in the outer boundary in the south of HinNam No. All in all it confirms that the park is still intact.

The zoning exercise supports the village rangers to monitor defined trails on a regular basis in their controlled area. The SMART database stores their observations to support the elected co-management committees and management units with continuous reports containing relevant information about e.g. key species and threats. 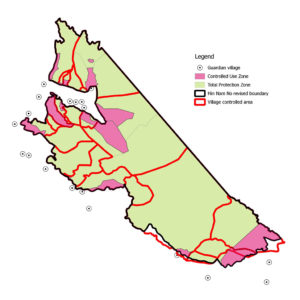 This process is part of the co-management approach which aims to involve the parks neighbouring 19 communities in managing and monitoring the HinNam No NPA. Therefore, the HinNam No Team seeks to improve technical, financial and human resources on the local level to manage and protect the park in a participatory way. Teams of village rangers are trained in 19 villages located in 5 village clusters. Currently 110 Village rangersactively monitor and patrol the park to protect its biodiversity and the natural resources.

Hence the involved villagers generate income as they are paid for the monitoring, patrolling and law enforcement efforts, which protect the resources valuable for food security and income generating activities such asnon-timber forest productsand eco-tourism in which already more than 50 households around the park are involved.

In order to make the delineation of management zones understandable, it is necessary that villagers clarify their areas of responsibility in a participatory approach. As a consequence, the delineationof the village area of control is well understood and is adopted by local communities and district staff which furthermore leads to a more effective management of the park.

Villagers and district officers learned to visualize and share knowledge to later make decisions based on reports and maps. Thus villagers recognized that their knowledge and interests are being respected and subsequently all involved parties learn to understand each other’s concepts of looking at the common landscape.