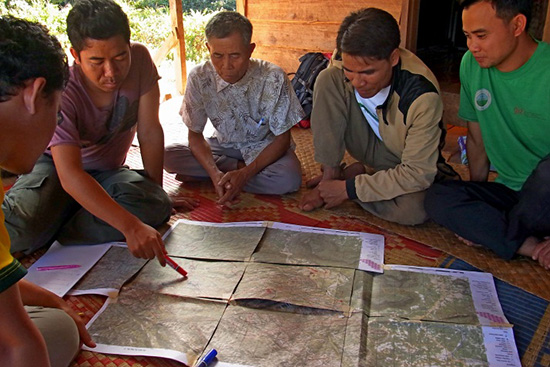 The Hin Nam No National Protected Area (HNN NPA) is located in the central part of Laos about 450 km South-East of the Vientiane Capital in Boualapha District of Khammouane Province. In the East at the Lao-Vietnamese border the park shares a boundary with the PhongNha-Ke Bang National Park in Vietnam. The HNN NPA and PhongNga-Ke Bang National Park form one of the oldest and largest continuous limestone ecosystems in Asia. The HNN NPA is of high conservation value and, there are key species such as the rare Black Langur, Red-shanked or Douc Langur, White-handed Gibbon, Great Hornbill etc.
The HNN NPA was established in 1993 under Prime Minister’s Decree 164 with a total area of 82,000 ha. Initially there was some support from WWF, later from IUCN. IUCN also helped to develop the Co-Management Plan 2010-2015. Since 2010, the German Government provides technical support through the GIZ. HNN-NPA is managed by the Department of Forest Resources Management (DFRM) under the Ministry of Natural Resources and Environment (MoNRE), who areGIZ cooperating partners. At local level, the Provincial Natural Resources and Environment Division set up HNN NPA committee to look after the overall coordination and management issues. The daily project implementation by the Boualapha District Authorities received technical support from IP-Consult. The present project runs until October 2018.

The Co-Management Concept is a new approach for NPA management. It was introduced for this project due to the high willingness for villagers to participate and the limitation of human resources and budget. For instance, the present project has only 9 part-time Government staff and 19 volunteerscompared with PhongNga-Ke Bang in Vietnam and Pangsida in Thailand, which have 400 and 164 staff respectively. There are 20 villages with approximately 8,000 inhabitants living around the HNN-NPA. The co-management approach aims at involving these communities actively in the management of the park. A number of 77 village rangers participate in activities such as patrolling, law enforcement and biodiversity monitoring. Furthermore promotion of eco-tourism, non-timber forest products and fish production is promoted with villager groups to increase their income and food security. The Co-Management Concept has been discussed, explained and applied through relevant consultation workshops with communities and topics such as: Why is it important to conservethe HNN NPA? What benefit can be derived from the HNN NPA? Who is responsible for the management of the HNN NPA?Doing this activity allowed communities to get an understanding about project objectives and the importance of NPA management. 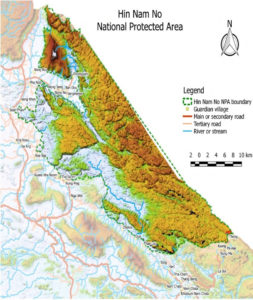 [1]The term “National Protected Area” used in Lao PDR is in the case of Hin Nam No NPA equivalent to “National Park” in surrounding countries.

To ensure a good distribution of tasks, six implementing units have been established and take lead by local government staff, volunteers and supported by villagers and project advisors. These implementation units composed of Database, Area Management, Research/Patrolling, Ecotourism and Livelihoods were set up and work guided by yearly and quarterly plans, elaborated participatory as a team.

The Area Management Unit has the mandate in National Protected Area zonation. According to Forestry Law, there are 4 zones which apply in zoning identification namely: Strict/Total Protected Zones (TPZ), where no access is allowed, except for monitoring and patrolling, Controlled Use Zones (CUZ), where villagers can collect NTFPs and fish according to their customary right in a sustainable way, Corridors and Buffer Zones. For Hin Nam No case so far, only the first two zones have been applied by concerned villages living around HNN NPA.

During the zoning process, intensive discussionswere organized between government staff and villagers, supportedby maps with existing data. Together they reviewed and mapped the outer boundary of the park, the trails leading into the park being mapped with GPS in the previous dry season, local names of rivers, valleys and mountains, etc. Villagers subsequently were asked to divide the village territory inside the NPA into TPZ and CUZ. So far, this work is done in 9 of the 18 villages which control land inside the HNN NPA. In these 9 villages, 85% of the area is proposed to be TPZ and 15% as CUZ. This is well above the IUCN recommended criterion of at least 70% of a national park area to be set aside as TPZ.

This zoning activity supports an existing system for the teams of 60 village rangers from 15 villages to patrol a number of agreed and mapped trails on a regular basis. Their observations are being stored in a SMART database that produces monthly reports. These rangers are being paid for their effort at a rateof 120,000 Kip per day. For now this payment mechanism is funded from the German Project, in future the HNN NPA management unit is expected to find funds to continue this process (GoL, Tourism, PES etc.). The rangers have also started to arrest poachers and fine them. Rules and regulations regarding HNNNPA are to be determined and maintained through Village Co-Management Committees. So far, these committees are piloted in 9 villages. A set of regulations that would institutionalize these committees is drafted and being submitted to the District Governor for his approval. Throughout implementing the above activities, it is expected that the project can help strengthen villager capacities, engage them more active and take ownership in managingHNN NPA. Capacity development of the government staff and villagers will lead to more effective management of the HNN NPA and make it become good example for NPA management in Lao PDR.This project implementation will also contribute to achievethe Aichi target 11 and 16.