Natural trials in Hin Nam Nor

As its name suggests, Hin Nam No (thorny rock sprouts) is an area of jagged limestone karst landscape where the Central Indochina Limestone belt meets the Annamite mountain chain. The Hin Nam No National Protected Area lies in Boualapha District, Khammouane Province. Roughly 170km east of Thak-hek and covers an area of 82,000 ha. For most of the Hin Nam No, the habitat is characterized by vertical limestone cliffs, deep jungle gorges and a mosaic of caves and a number of wa-terfalls.

The rugged limestone coun-try has served as a refuge for several key species of primates, in particular,the endangered black langur (Trachipithecus laotum ebe-nus) and red-shanked douc langur (Pygathrixnemaeus). Other primates are present such as southern white-cheeked crested gibbon, and multiple species of macaque making this area, a priority primate protec-tion site. Further notable species contributing to the conserva-tion value of the area are four species of hornbill birds; among these, the great hornbill and the wreathed hornbill. Another bird, the sooty babbler (Stachyris herberti) is of interest to bird specialists as it inhabits only the Indochinese limestone land-scapes. Traditionally, villagers surrounding the protected area have hunted some of these animals but are now protecting wildlife and invite you to visit to experience the habitats, detect signs of these rare creatures and even see and hear the ani-mals themselves. 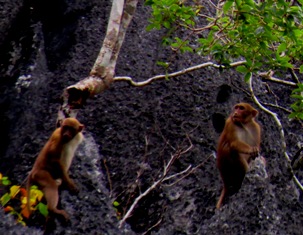 Must See Hin Nam No Sites:

The resurgence of the Houay Hok stream. This large chamber is kept clean by seasonal inundation. The cave is reached by a 6km walk up stream from Ban Thongxam village. Otter tracks are often seen at the mouth of this cave, and a strange boulder ceiling can be investigated inside the cave. Keep quiet as you walk to this cave because you may be fortunate enough to encounter a family of black langurs either morning or evening high on a cliff-face overlooking the walking track. 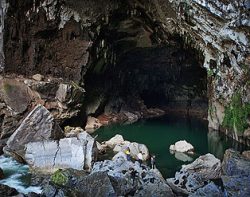 The Houay Hok stream has cut a path through a limestone outcrop for about 60m. In this tunnel there is a beach for most of the way through and a constant flow of water at a depth of about 1.5m in the stream allows for swimming through the cave for those willing to face the cold and dark. Bats and swallows nest in this cave as indicated by the name “nok aen” (swallow). There are passages on the left hand side. One large cavern is lit by a sky-window where villagers say that this cave was inhabited by about 3000 North Vietnamese soldiers during the war. There is evidence of this occupation from the tin cans, and even a tooth-brush from the war-time era. Please preserve the historical value of this cave by not taking souvenirs. 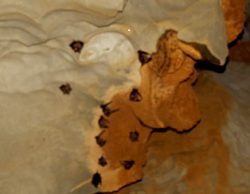 A 20m waterfall with a deep pool at it’s base located 2.2km from Ban Nongboua. During the dry season there is usually still some water flow and is suitable for a refreshing swim after a guided walk from the village.

Assamese macaques live only about 800m south of Ban Nongseng. These primates live in caves on Pha Koud cliff. It is unknown how they get their water ; perhaps deep in a cave. They do come down to the foot of the cliff to eat the fresh vegetative shoots. Paying a village guide to take you to see them early in the morn-ing or in the evening provides further incen-tives for conserving the remaining forest at the base of the cliffs. 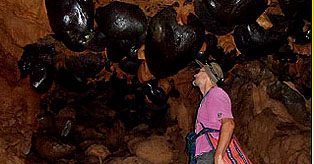 1. Houay Hok Long Trail. This one day trek generally follows the stream and over a sandstone ridge, to the resurgence cave of Houay Hok stream (Nam Ork Cave). Look out for black langurs on the cliffs overlooking the path. After eat-ing lunch resume downstream to walk through Tham Nok Aen cave tunnel, then further downstream to the Tham Pak Tham cave, then back to Ban Thongxam (total length 12km, duration 7.5 hours) 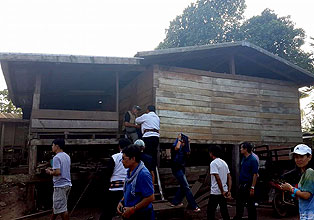 Tad Songsou waterfall. This 2.2km walk or tractor ride takes you to a cool waterfall swimming pool at the base of Phou Cheuang Mountain.

Ban Thongxam treks are closed between June and October. Due to road conditions and stream volume. Year Round Short treks from Ban Nongboua (Tad Songsou waterfall) and Ban Nongseng (Macaque spotting at Pha Koud), may still be arranged in the wet season.

Welcome to Ban Thong Xam Village, an ethnic Yooy village. Here you can trek the Houay Hok Trail with a local guide. There are two options, the short trail (6.5km / 3.5 hours) and the long trail (12km / 7.5 hours).

It is required to do the trek with a village guide. The fee paid to your guide includes a portion that is shared with the village for protecting the forest. Your village guide will come meet you here at the information board. The guides’ houses are next to the information board, so you can ask at their houses if you do not see anyone. Prices for guides are posted next to the signboard.

Homestay may be available in the village. Ask your village guide and look for new information posted on this board for prices and details.

This trek follows Houay Hok stream up to Tham Nok Aen tunnel, then further downstream to the Tham Pak Tham then back to Ban Thongxam.  This trek can be treated as a longer half-day or a short full-day trek depending on how much time you spend at the caves.

This one-day trek generally follows the stream and over a sandstone ridge, and to the resurgence cave of Houay Hok stream, Nam Awk Cave.  Look out for black langurs on the cliffs overlooking the path.  After eating lunch, resume downstream to walk through Tham Nok Aen cave tunnel, then further downstream to the Tham Pak Tham Cave, and finally back to Ban Thong Xam Village.

There are two species of langur in Hin Nam No, the Indochinese black langur (Trachypithecus ebenus) and the red-shanked Douc langur (Pygathrix nemaeus), which are both globally threatened. Black langur can be seen on the cliffs from the trail, most especially in the morning and late afternoon. When coming down the sandstone ridge make sure that you are quiet, walking slowly and looking out for wildlife to the right of the track. There are four other species of primate found in Hin Nam No NPA, which include Southern white-cheeked gibbon (Nomascus siki), Bear Macaque (Macaca arctoides), Pig-tailed Macaque (Macaca nemestrina), and Assamese macaque (Macaca assamensis). Macaques can be seen nearby at Ban Nong Seng.

This cave has a unique and an impressive boulder ceiling. You can also find the cave worm trap-lines, as well as wildlife tracks in the sand, such as otter tracks.

This cave is named after the swallows (nok aen), which you can see flying around the cave. You will also see bats in the cave. The large branch of the cave with the skylight used to house about 3,000 North Vietnamese soldiers during the war.  You can see evidence of the soldiers, such as old fish tins, boots, pieces of plastic camouflage sheets, and even a toothbrush.  (Please do not take any of the items.) You can also swim down through the cave, but please be careful of fishing nets.

Tham Pak Tham is a small cave filled with water, known is as a resurgence. It is a nice place for a cool swim and is a good way to finish off a trek.

Nearby Houay Hok Stream is Houay Talee Stream. Khoun Talee is a small, still source of the stream.  Here you can find animal footprints in the sand, and also see the big tree, ton mak meu, which has an edible fruit.

At the former site of Salang Village, you can observe many fruit tree here, including jackfruit, mango and tamarind. There is also a good view of Tham Pha Vao Cave, a very big cavity in the cliff-face.  Your guides can tell you the story of the village and cave.

Tourism in Ban Thong Xam provides incentives and encouragement for villagers to protect the natural forest along the Houay Hok Trail.  Your payment supports the co-management system that gives the village ownership of protecting the natural resources and wildlife in their village area. 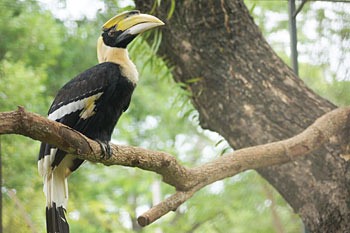 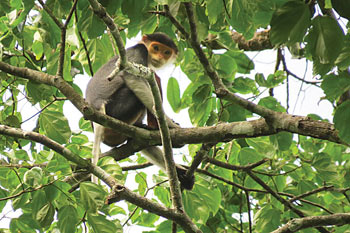 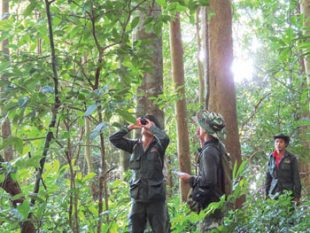 Welcome to Ban Nong Seng Village. Here you can take a walk with a local guide to spot Assamese macaques at Pha Koud, a cliff area that is just a short walk from the village. The total length of the walk is 2km and takes about 1 hour or possibly more depending on how long it takes to spot and watch the macaques.  The trail is not difficult, however, be prepared to get your shoes wet.

You should go with a village guide to visit the cliff area to see the macaques. Your guide can help you spot these amazing primate. The fee paid to your guide includes a portion that is shared with the village for protecting the forest. Your village guide will come and meet you here at the information board. The guides’ houses are next to the information board, so you can ask at their houses if you do not see anyone. Prices for guides are posted next to the signboard.

The Assamese macaques at Nong Seng area are believed to live in caves on the cliff face and eat fruits and shoots of trees on the cliffs and around the base of the cliff. They live in groups of 13-35 individuals. This species is listed as Near Threatened by IUCN due to recent declines as a result of hunting and habitat degradation in South and Southeast Asia. There are two other species of macaques found in Hin Nam No NPA, Bear Macaque (Macaca arctoides) and Pig-tailed Macaque (Macaca nemestrina), which are both globally threatened. There are three other primate species found in Hin Nam No, including Southern white-cheeked gibbon (Nomascus siki), red-shanked Douc langur (Pygathrix nemaeus), and black langur (Trachypithecus ebenus). 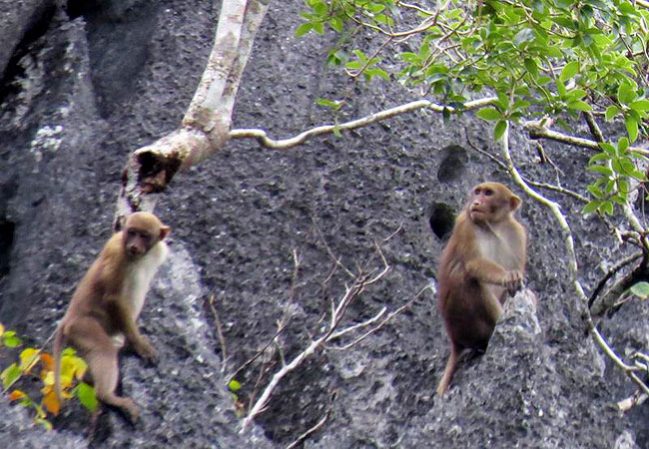 Tips for Improving Your Chances of Seeing Macaques

Caves at the Base of the Cliff

The cave at the base of Pha Koud was where villagers sheltered during bombing raids. Nong Seng Village wasn’t on the main route of the Ho Chi Minh Trail, so the bombing was not as frequent as around Ban Nong Boua (only about 5km away).  The occasional Vietnamese truck passed though, perhaps sending supplies to soldiers in the Tham Nok Aen Cave near Ban Thongxam. Chicken was traded with North Vietnamese soldiers for their rice rations.

Tourism in Ban Nong Seng provides incentives and encouragement for villagers to protect the natural forest at the base of the cliffs.  Your payment supports the co-management system that gives the village ownership of protecting the natural resources and wildlife in their village area.