Win-win for people and ecosystem in HNN NPA 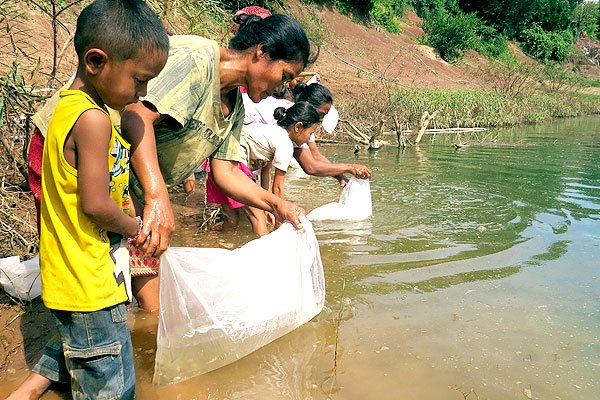 This July, the outreach unit of Hin Nam No National Protected Area (HNN NPA) supported the traditional celebration on fish release day at Sa Ang Village, Bualapha District in Khammouane Province. Lao PDR’s National Aquatic and Wildlife Day is usually celebrated on July 13 each year. As part of this annual celebration, people across the country release fingerling fishes into lakes, ponds, and rivers to draw attention to the conservation and protection of diverse terrestrial and aquatic wildlife.

Former studies have shown that the villages surrounding HNN NPA highly depend on natural resources. Especially fish forms an important part of people’s diet and is the main source of protein. Fish as part of the ecosystem are well adapted to a wide array of habitats and the fish species diversity in HNN area can be considered as high. The fish conservation zones that were established by the GIZ supported project are an important contribution to promote both food security and biodiversity conservation. Thus, the celebration of the Fish Release Day also included educational lessons about fish, the role of fish in an ecosystem, dos and don’ts of fishing techniques and wildlife protection.

The highlight of the day was the moment when each person was invited to go down to the riverbank of Xe Bangfai River and released a bag of carp fingerlings into the water. In total 5,000 fingerlings which were sponsored by the HNN project were released.

The HNN outreach team was pleased to invite all villagers of Sa Ang Village to the celebration, but the activities focused mainly on the kids. After releasing the fingerlings into the river, the outreach team continued with some non-formal education for children. The kids were shown presentations and pictures about fish and other animal groups and were encouraged to reflect about the characteristics of fish. The importance of fish for their livelihoods and the surrounding ecosystem was another important topic. A drawing contest of local fish species that followed was enjoyed a lot especially by the youngsters. Interestingly, all the activities were also followed by a group of adults that showed at least the same interest as the kids.

The celebration of the Fish Release Day in Sa Ang Village contributed to the enhancement of knowledge on the one side and more awareness of the importance of conservation on the other side. Especially in the context of rural Lao PDR fish conservation and fish conservation zones have proven to create win-win situations. The positive effects for people and the ecosystem can often be demonstrated after comparatively short times. At this point it will also be very interesting to see the results of another ongoing activity. In cooperation with WWF Laos, fish from fish conservation zones in and around HNN NPA were tagged and the first monitoring results are expected soon.